The momentum in the grocery e-commerce segment in Pakistan as a whole has been underway for roughly five years (with players such as MandiExpress, Sabzi.pk, QnE, etc. operating since 2015), but the COVID-19 pandemic and subsequent lockdowns helped startups see quick and significant growth. (Read MIT Technology Review’s 2016 piece here) The food and grocery retail market in Pakistan made $59.3 billion in total revenue  in 2018 which constituted a compound annual growth rate (CAGR) of about 8.4% from 2014 to 2018.

Although we have not seen any updated reports on how these numbers have changed in 2019/20, the market has experienced  a surge in use of not only B2C but also B2B online grocery services. In Pakistan, where grocery retailers typically rely on curbside deliveries by distributors every few days for procuring inventory – this presents traditional retailers and kiryana store (small mom and pop style corner stores) owners with a number of challenges (to be discussed later in this issue).

These challenges also translate into an enormous market opportunity, and our Insights team sought to break down this complex landscape in Pakistan. We will dedicate two issues to this topic. In this issue we focus just on analyzing startups operating in the B2B grocery segment, and particularly those servicing this large landscape of kiryana stores. (In next month’s issue, we will cover the B2C models in the market). According to investment data extracted from i2i’s Deal Flow Tracker, a total of $4.3 million was raised by 5 B2B grocery startups in 2020 alone . This means 17% of the total investment amount raised already this year ( 5/26 deals) is accounted for by online B2B grocery startups, which included Tajir (2 deals), Bazaar, MandiExpress, and Dastgyr. With no female founded/cofounded startups in the sector, the space remains largely male dominated unlike other sectors such as EdTech and HealthTech. For details refer to Figure 1.

Note: The operational definitions of the categories used in the Figure 1 can be seen here: https://www.euromonitor.com/modern-grocery-retailers-in-pakistan/report

In understanding this segment, it’s first important to understand the key players in the value chain, which are the manufacturer, distributor, wholesaler, and the retailer. Understanding their role in the traditional retail supply chain vis-a-vis how it would translate into a digital system is crucial to assessing the existing startups’ offerings. The top tier of this supply chain is occupied by manufacturers (such as P&G and Nestle), which in turn supply to major retailers and distributors. The amount of capital available to large retailers – often comprising of big department stores such as Metro, Imtiaz, Carrefour, etc. – typically means they have a direct relationship with the manufacturers (and also have the capacity to make bulk orders). However, these big grocery retailers make up only a fraction of the grocery retail industry. In comparison, kiryana stores have an approximate annual turnover of $3 billion, while domestic convenience stores have $200 million, and the more modern supermarkets came in at $176 million in 2012 (Note: Given that this data is 8 years old, we can assume the numbers are higher now). The distributor – with its own fleet, delivery staff, and inventory –  therefore becomes important in getting goods from the manufacturer to the (a)- retailers and (b)- small wholesalers. Kiryana stores fall at the very bottom of this value chain, and end up either procuring inventory from small wholesalers or directly from big retailers, which means they often run out of stock and can lose business while restocking.

It is a highly fragmented and inefficient system for the general retail industry that’s reportedly worth $125 billion annually but specifically for the grocery sector worth $48 billion as of 2020. Out of the estimated one million shops in the country, at least 95% are kiryana stores and they account for 70% of all grocery purchases in the country, which makes this an enormous opportunity to capture and where there is a lot of space for innovation. For example, MandiExpress (similar to FreshDirect) that has been operational since 2015 has both a B2B and a B2C aspect. Under the B2C model, consumers are able to directly purchase vegetables, fruits, meats, seafood, and organic and gourmet foods. Aside from the B2C model, MandiExpress also caters to prominent restaurants and organizations, other ecommerce platforms (such as Daraz), and trading in the wholesale market. Early this year, their founder Jehanzeb Chaudhri told the Tribune that their recent $715,000 investment will be used to fulfil the immense demand coming from e-commerce partners like dFresh (by Daraz.pk). Sabzi.pk, founded in 2015, also offers delivery of fruits and vegetables with both a B2B and a B2C model. In 2016, after receiving an undisclosed seed stage investment, they had started delivery services to hotels and restaurants in Lahore. 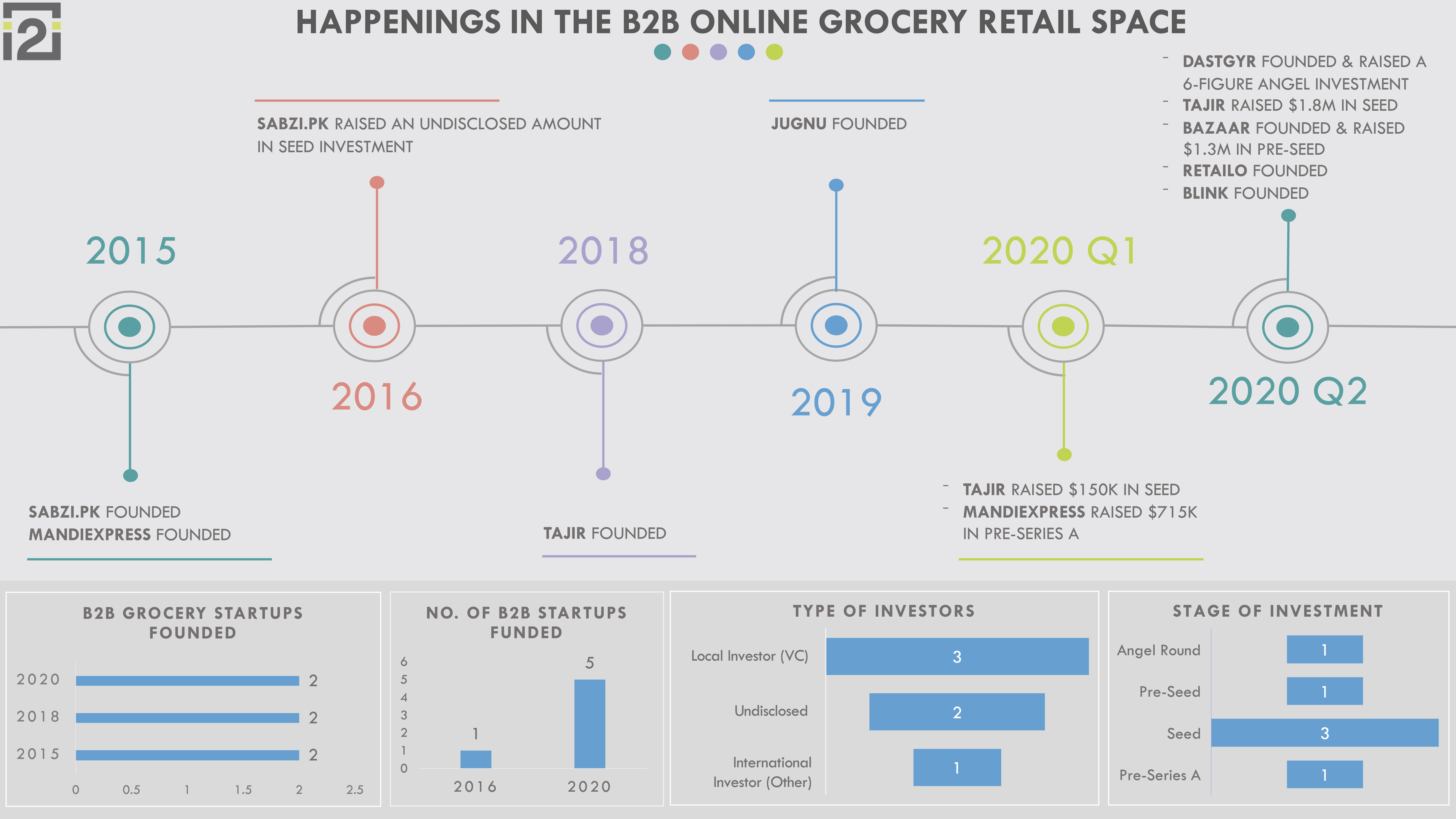 Most notably, players like Tajir, Bazaar, RetailO, Jugnu, and Dastgyr are all servicing kiryana stores, and are providing somewhat similar offerings under the broader online inventory procurement segment. Yasir Memon, co-founder of Jugnu (and SalesFlo, a B2B Sales Fulfilment platform), shared with our Insights team that ever since the company was founded in 2019, it has successfully onboarded 12,000 retailers so far. As they have bootstrapped their way through the market, he emphasized that they do not see capital as a bottleneck in the B2B space, at least not so much as the actual change management that includes rendering the processes and systems. “There is little flirting and more long term relationships in the B2B space”, he put it, which is why they are currently focusing on building a solid foundation with their product. Similarly, companies such as Tajir and Bazaar are bringing transparency to the retailer by providing price comparisons through their mobile apps, a feature retailers find empowering. By taking out the middlemen, i.e. the distributors, these B2B retail startups provide significant value to the typically overburdened retailers and kiryana store owners.

Saad Jangda, co-founder of Bazaar, shared in an interview with our team that they firmly believe that understanding their customer allows them to objectively gauge and design for their needs, which is how Bazaar began its journey in 2020. Both Tajir ($1.8M) and Bazaar ($1.3M) raised significant amounts in investment this year with the former operating in Lahore whereas Bazaar is currently focused on Karachi. Another similar new entrant in the market is Dastgyr that only 3 months into being founded in 2020, raised an undisclosed amount in angel investment. Dastgyr is a mobile-based platform that makes it easy for the grocery store owners to procure inventory. It uses a marketplace model offering next day delivery to stores in Karachi & Lahore. The deliveries are managed by Dastgyr, which uses their own fleet, and the company doesn’t store any inventory.

Finally, another very interesting new entrant in the space is Blink (by Eat Mubarak), which was founded in 2020 and operates on a B2B2C model, which is unique because it provides an online ordering solution to restaurants and hotels as opposed to most other players who focus mainly on inventory procurement. In a conversation with Sair Ali (founder at Blink & cofounder Eat Mubarak), he discussed how building a viable and user friendly grocery delivery and/or procurement system is not just a website with some products on it. It is a much more sophisticated and layered task that is often underestimated and undervalued in Pakistan compared to other markets. Blink’s direct competitors (i.e. software houses, independent developers, etc.), he noted, typically fail to understand that this is an end to end experience where the front end is as important as the operational efficiency of the online tool. In relation to this, Ali called his solution ‘quick commerce’ as opposed to simply e-commerce. It factors in the delivery time optimization through areas mapping and more; and all of this combined brings immense value to the table for traditional players in need of online solutions.

As kiryana stores are going online with the help of these B2B grocery startups, they are leaving a digital trail behind that can be used to track their financial transactions and add them to the tax net. According to a survey conducted by  Jugnu, a number of these kiryana stores are being taken over by a younger demographic, with a substantial number owning WiFi devices and shopkeepers accessing social media apps such as TikTok that have effectively replaced television as a source of entertainment. This changing demographic of owners is open to the idea of entering the tax net with the major incentive being the ease of doing business through the B2B grocery startups.

B2B grocery startups are looking to disrupt the supply chain and are working to reduce the small retailers’ and kiryana stores’ dependence on the middleman. Players like MandiExpress incentivize aartis (middle-man) with greater access to markets that are often outside of their reach.  In ecosystems such as Pakistan it is hard to sidestep players like the aartis who, with their immense influence,  can constrict the supply chain suffocating such startups. Faisal Aftab (Managing Partner at LIVC) noted that startups can’t enter the market “guns blazing or seek to be a disruptor from the get go,” they have to work within the system. 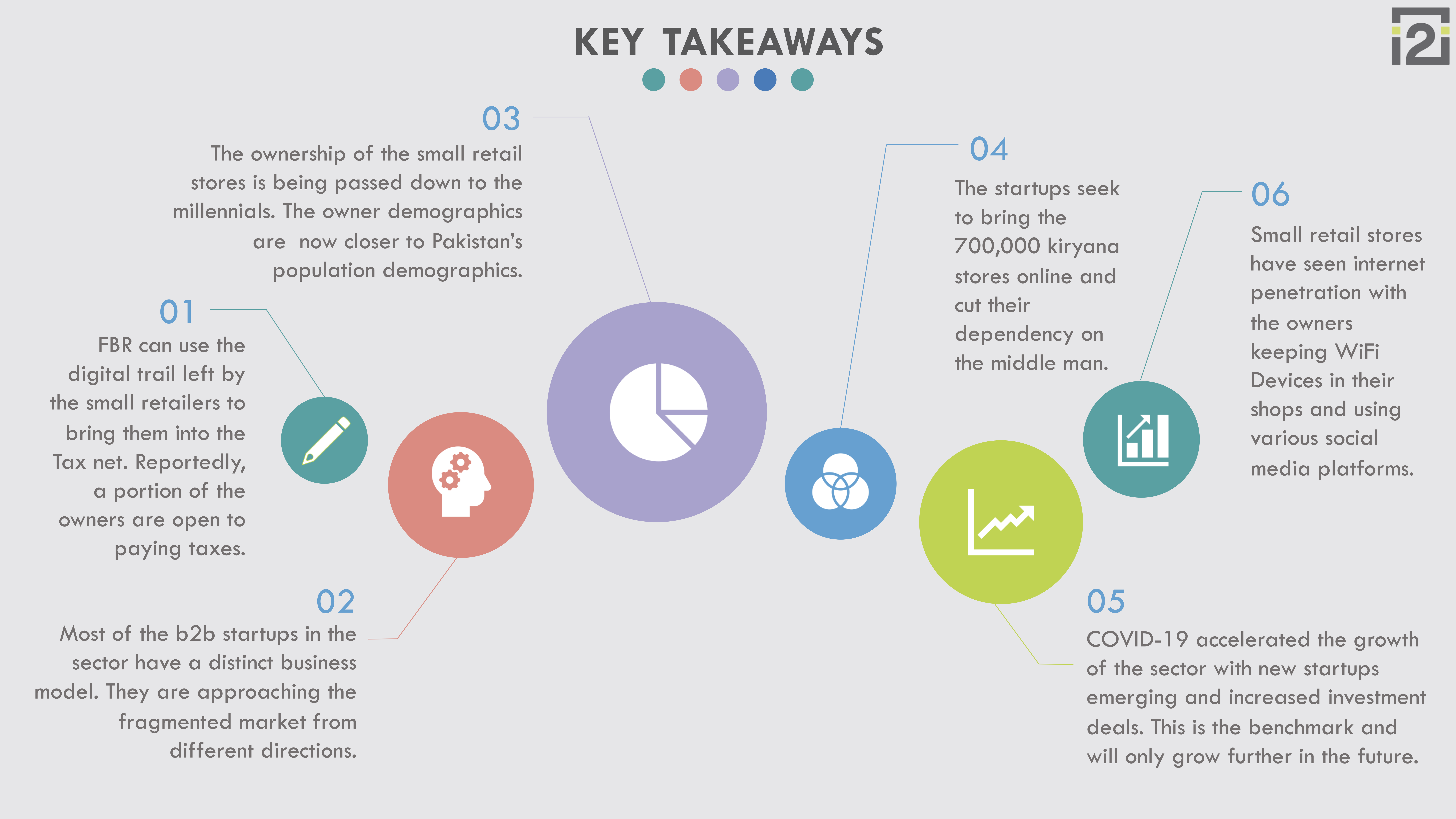 On average, a kiryana store owner buys stock that will last them a few days from the distributor’s representative who visits once a week. Once this stock runs out, the owner can either wait until the distributor visits next or they can visit the wholesale market. There are pros and cons with both approaches. The former means the owner risks losing out on potential customers due to the lack of stock and the latter means there is a cost of transportation and time involved – which can cut into their margins. The B2B startups that are addressing this gap are game changers for the sector, especially for these kiryana store owners. Ali Mukhtar (Fatima Ventures) noted, “The shopkeepers were surprised to see us deliver under a 24-hour agreement even when it was raining.”

Furqan Kidwai (Dawaai) believes that in developed markets, stores like Walmart are large enough to speak to manufacturers. Such markets often have manufacturers directly selling to wholesalers and retailers using online platforms. In the case of Pakistan, India and Bangladesh, the market is over 90% fragmented and the need for the wholesaler arises; those already working on a razor thin profit margin only care about turning over the stock. The B2B model  disrupts the retail supply chain by eliminating the middlemen and allowing retailers and kiryana store owners to procure inventory online whenever their stock is depleted, have it replenished from the comfort of their stores without wasting time and money, in exchange for a fee charged by the B2B startups.

As we zoom out, we have seen this sector thrive in other emerging markets. In Egypt, MaxAB, a B2B marketplace that connects informal food & grocery retailers to suppliers raised $6.2 M in seed funding led by BECO Capital (the largest ever seed round by a startup in MENA), while an Indian startup Udaan has raised  $585 M (Series D) with a reported valuation between $2.3B and $2.7B as of October 2019. These companies are well-funded, and their examples present an interesting case study for the potential journey of the sector in Pakistan. As we see more startups raise funding, we shall see which players are able to truly capture this large customer base and capitalize on this opportunity.

Stay tuned for our next issue to see how all of this ties in with the B2C grocery delivery space.